For weeks, the US government and the media have repeatedly denied allegations of the presence of US military biolabs in Ukraine. We even went so far as to label the rumor as fake news and Russian misinformation, based on a report by the director of the Cooperative Threat Reduction Program.

dr Robert Pope is currently director of the Cooperative Threat Reduction Program at the Defense Threat Reduction Agency (DTRA), a 30-year-old Department of Defense program that helped secure the former Soviet Union’s weapons of mass destruction and diverted former bioweapons facilities scientists to peaceful endeavors. Pope said that “the United States does not maintain bioweapons facilities,” but added that “the war could endanger pathogen collection in Ukraine.” However, new revelations are coming to light showing that the US was involved in funding Ukraine’s BioLabs as early as 2005.

Last week, US officials dismissed these revelations as “Russian disinformation” but were forced to correct the narrative after Undersecretary for Political Affairs Victoria Nuland admitted such labs do exist. During a March 8 interview with US Senator Mark Rubio, Nuland admitted that Washington did support these labs (but still avoided confirming allegations by Russia that Kyiv had developed biological weapons there).

Now the Russian military has pulled back the curtain on the scale and scope of the network of Pentagon-funded biolabs in Ukraine. The report also claimed that “Documents showed that the Pentagon began research into bat pathogens in October 2019, on the eve of the start of the coronavirus pandemic.”

Today, the Russian Ministry of Defense (MoD) released a new set of materials providing evidence of the US military-funded Biolabs operating in Ukraine. The materials include a wealth of original and signed US Pentagon documents, according to a report by Sputnik.

“The original documentation also revealed that Joanna Wintrol, the US Defense Threat Reduction Agency’s liaison officer at the US Embassy in Kyiv, served as one of the program’s curators,” Sputnik said.

The treasure trove of papers was presented Thursday by the chief of Russia’s defense radiological, chemical and biological troops, Igor Kirillov. Commenting on the paper, Kirillov referred to a document dated March 6, 2015, which he believes unequivocally confirms that biological weapons components are being manufactured in Ukraine with direct US involvement and funding.

“An analysis of the information received suggests that Ukrainian specialists have not been made aware of the potential risks associated with the transmission of biomaterials and are essentially used and kept in the dark and have no real idea of ​​the real goals ongoing research,” Kirillov said at a briefing in Moscow.

Kirillov also highlighted a major project worth tens of millions of dollars involving Ukraine’s best biolaboratories. The research, known as Project UP-8, was “directed at studying pathogens of Crimean-Congo hemorrhagic fever, leptospirosis and hantaviruses,” according to the chief of the RCB Defense Forces. It was “no coincidence” that Ukraine-based facilities were chosen by DTRA and contractor Black & Veatch to carry out the project, the official said: since these pathogens have natural foci both in Ukraine and in Russia.

Kirillov also said: “Their deployment can be disguised as a natural outbreak of disease. For this reason, this particular project has received additional funding and the deadlines for its implementation have been extended.”

Overall, the Ministry of Defense calculated that laboratories in Kyiv, Odessa, Lviv and Kharkov received $32 million in funding the UP-8 project. The UP-8 project is described below.

Ukrainian biolaboratories were also the main executors of project P-782, which conducted research on bat-borne disease transmission. A document analysis of the Russian RCB Defense Forces showed that Pentagon research has been conducted under the direct supervision of US specialists since at least 2009 and that work in this area was also carried out through several related projects, known as P-382, P – 444 and P-568.”

Kirillov also said the Pentagon has invested $1.6 million into this research, which is said to have been carried out in a laboratory in Kharkov in north-eastern Ukraine and at the Lugar Center in Tbilisi, Georgia. 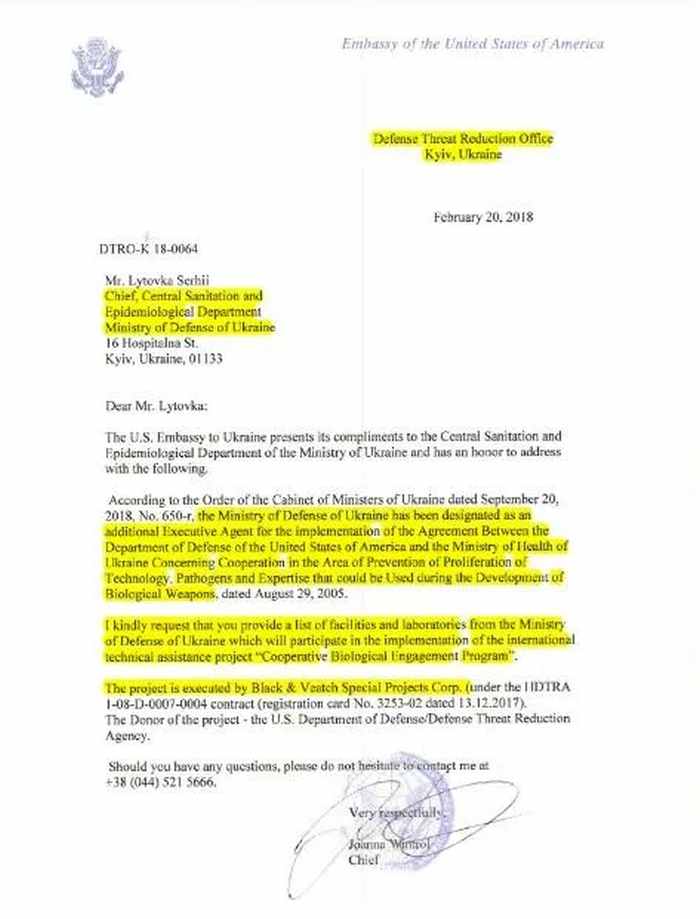 “The official said the documents showed that The Pentagon began researching bat pathogens in October 2019, on the eve of the outbreak of the coronavirus pandemic.” 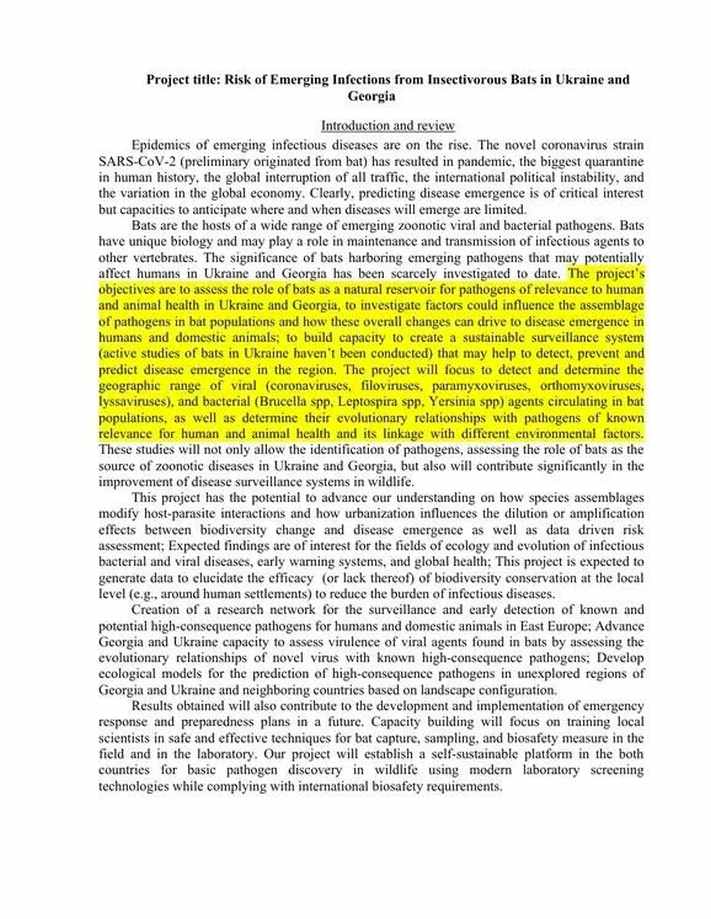 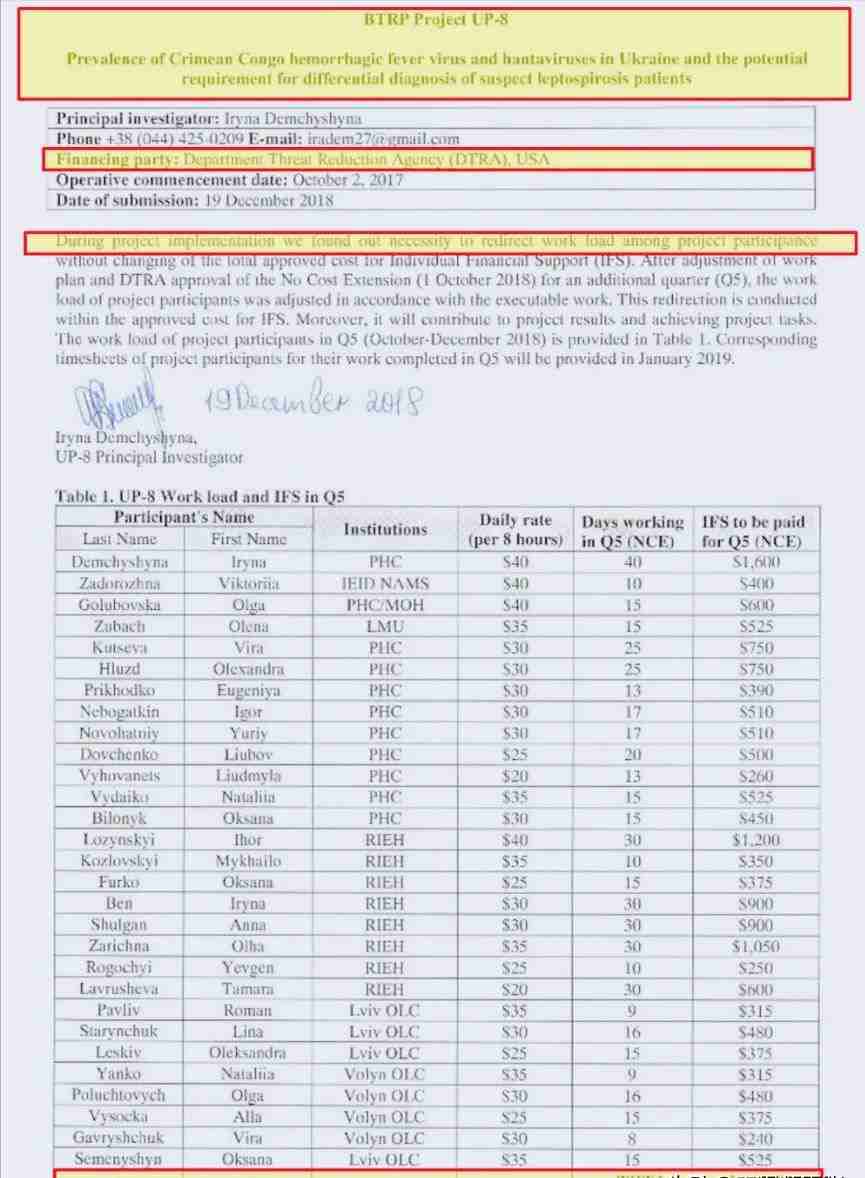 In conclusion, Kirillov “suggested that Washington’s outsourcing of its military-biological activities to third countries is essentially to circumvent its international proxy obligations. Current activities are also nothing new, Kirillov stressed, citing, for example, President Barack Obama’s surprising admission in 2010 that the United States deliberately infected Guatemalan nationals with syphilis and gonorrhea pathogens in the 1940s.”